Germany is a country of wine - for 2,000 years the finest wine has been produced on the banks of the Moselle and Rhine.
Today in Germany, around 80,000 wine growers produce more than nine million hectoliters of wine per year. During wine production, monitoring the temperature plays an increasingly important role. On behalf of Hüttenhein GmbH & Co. KG Anlagenbau, JUMO took on the role of service provider and developed an innovative automation solution for a wine grower in the Palatinate region, taking on planning and project management tasks. 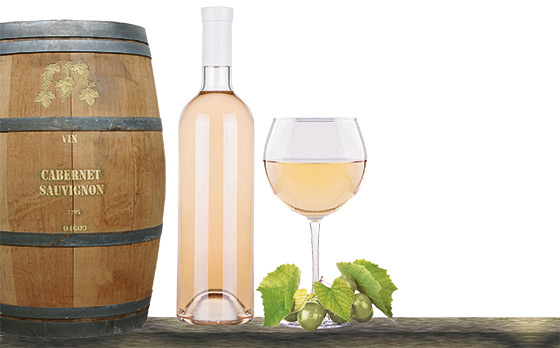 Hüttenhein Anlagenbau has been a partner in the development of professional overall systems since 1978, particularly for the food and beverage industry. Since it was founded, the company has been developingand implementing tempering stations including the corresponding pipeline construction in stainless steel for wineries. For the project with the Welter winery, the plant engineering company chose to rely on the technology and expertise at JUMO.

Monitoring the fermentation of wine has become a highly relevant subject in the last few years. The better the temperature in the storage containers can be kept within the optimal temperature range, the higher the quality of the wine. This is particularly necessary immediately after filling the tanks with the grape must because so much heat is generated during the fermentation process that artificial cooling is required. In a special method known as cold fermentation, the temperature must constantly remain between 15 and 20 °C to allow particular yeast strains to work. The resulting wines are extremely fresh, pure, and uncomplicated with a relatively high alcohol content.

For the cooling solution which was implemented for the Welter winery by Hüttenhein Anlagenbau, the tanks are cooled in different zones using thermowells through which glycol flows.
This way, almost any low temperature can be generated in the tank. The current project phase contains 70 tanks which are in different storage rooms, some of which are outside. Hüttenhein Anlagenbau used the modular measuring, control, and automation system JUMO mTRON T as a central control element.
It analyzes the data from the JUMO probes, which are attached to each tank, and with the help of JUMO controllers controls the temperature. Furthermore, the pressure in the entire cooling system is monitored. With the help of the recording function of
the JUMO mTRON T, important actual values are also recorded. The central processing unit sits in a control cabinet which is located in a container outside of the winery and which houses another tank for the coolant as well as several pumps for the 650 KW chilled water units. The main operating panel, which is used to control the temperature, is located in the office of the operations manager. Furthermore, a total of 29 JUMO mTRON T input/output modules are used. A special feature is the five subdistribution units which are dissipated around the company‘s premises and which are controlled by router modules. With the help of separate operating panels, individual process steps can
be controlled directly on-site. For all of this, JUMO not only delivered the different components but also supported the entire project with engineering services from the remit to startup on site. This meant that, among other things, individual process screens were programmed by the JUMO application team. 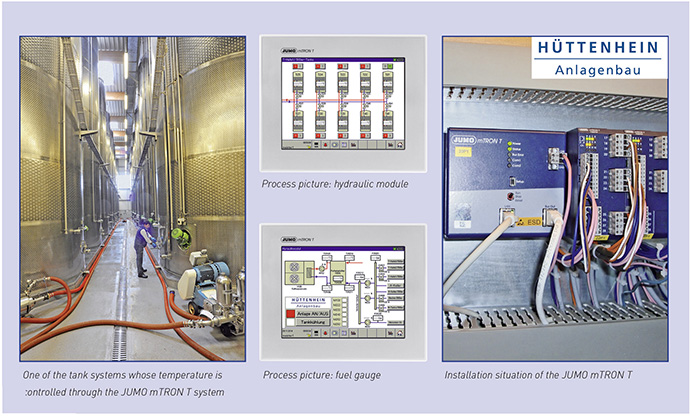 Hüttenhein Anlagenbau and the Welter winery were, above all, impressed by the simple parameterization and configuration of the system on site, which are possible even without extensive PLC knowledge. The flexibility of the JUMO mTRON T system, which can be expanded modularly at any time, is also a clear plus. This is also the reason why Hüttenhein is now also using the system for other customers. Expansion of the plant at the Welter winery is also being planned.

The Welter winery: a family-run business in Engelstadt, Germany