Controlled cheese maturation
with the aid of an automation system

Germany is a cheese country. Almost 25 kilograms of cheese are consumed annually per person and 1.1 million tonnes are exported. From the North Sea to Allgäu in the very south, large and small dairies offer around 150 regional and national cheese specialities. Cheese production is a traditional trade that has not changed for centuries. However, even though the principles have not changed, modern technology always finds its way into cheese production. One dairy in the Allgäu region is now using an automation system to ensure controlled cheese maturation. 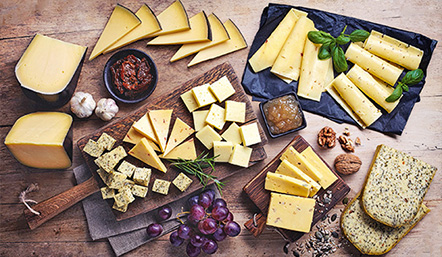 The journey from milk to cheese is always the same. Fresh or pasteurized milk is skimmed and then adjusted to a defined fat content using cream. The milk mixture is pre-matured using lactic acid bacteria and then coagulated using rennet so that the curd is made. The remaining whey is separated from the curd by draining and pressing. The curd is then left to rest. It is during this phase, which can take weeks or months, that the cheese acquires its very special character.

Gebr. Baldauf GmbH & Co. KG has been producing cheese specialities from hay milk in the Allgäu region for over 150 years and runs several small alpine dairies. The task was to further optimize the cheese quality at two of these locations using heat treatment chambers. To do so, the company wanted to use thermophilic cheese cultures during the maturation process to provide a milder, less acidic flavor. While conventional, mesophilic cultures work optimally in temperatures as of 25 °C, their thermophilic counterparts require significantly higher temperatures. However, the process can be controlled very precisely based on the pH value, thereby ensuring a consistently high product quality.

The company relied on engineering solutions by JUMO GmbH & Co. KG to implement this project.
The JUMO Engineering team bundles decades of experience in industrial measurement, control, and automation technology. This team supports customers throughout the entire project handling and develops customized applications for a variety of industries. The extensive portfolio ranges from running basic feasibility analyses and workshops through to drawing up product requirements specifications and specification sheets as well as configuring, programming, and auditing automation solutions.
In addition to startup and project documentation, tailor-made training courses are also offered.

The task in this case was to control two heat treatment chambers at each of the two locations using a temperature profile. In addition, the pH value of the products needed to be continuously measured as it is the termination criterion for the heat treatment process. The process data needs to be recorded and remote access must be possible via the Internet.
All these requirements could be implemented using the JUMO mTRON T automation system, the JUMO AQUIS touch multichannel measuring device, and JUMO temperature and pH sensors. The JUMO mTRON T system has a modular design. Different measurands such as temperature, pressure, or humidity can therefore be precisely recorded and digitalized using the same hardware. For individual control applications the system has a PLC (CODESYS V3), program generator and
limit value monitoring functions, as well as math and logic modules. 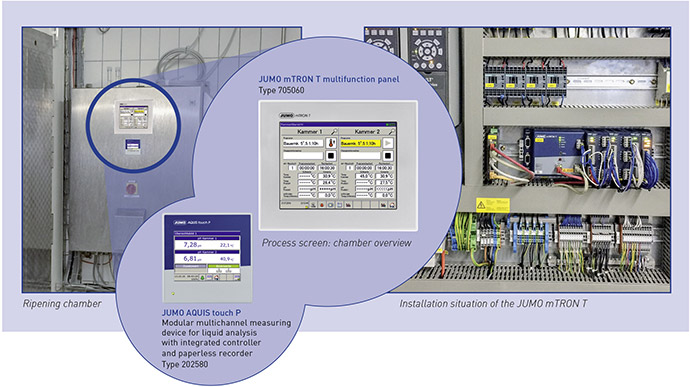 In addition to flexibility, future security and expansion options also played an important role in the deployment of the automation solution. For example, the JUMO mTRON T enables simultaneous operation of up to 120 control loops.
Furthermore, the inputs and outputs of each controller module can be individually expanded and adjusted via expansion slots. The clear overview of all recorded values is another advantage.
In addition to enabling visualization, the multifunction panel also enables easy to operate controllers and program generators.
Moreover, user-dependent access to parameter and configuration data for the overall system is possible. The recording functions of a full-fledged paperless recorder, including a web server, are also implemented as a special feature in the JUMO system. Proven PC programs are available for extracting and evaluating recorded data. The solution for the dairy in the Allgäu region involved the HMI being operated entirely using custom process screens. The screens enable program selection, program start, and entries in a batch field.

The pH value in the cheese is measured by a JUMO AQUIS touch using an insertion electrode while the temperature is measured using an insertion probe. The JUMO AQUIS touch is a modular multichannel measuring device for liquid analysis with an
integrated controller and paperless recorder. Regardless of whether the measuring task involves the pH value, redox value, electrolytic conductivity, highly-purified water resistance, temperatures, or disinfection measurands (such as free
chlorine, total chlorine, chlorine dioxide, ozone, hydrogen peroxide, or peracetic acid), the JUMO AQUIS touch P provides a central platform for displaying and processing the corresponding sensor signals.
The heating chambers in both alpine dairies are linked to the company‘s head office. The batch data from the plants are extracted on the server at the headquarters and relevant form printouts are stored on the server as PDF documents.
Additionally, the form indicates which alpine dairy the batch comes from so that the form is also printed on the network printer of the respective dairy.

The quick and easy implementation of the required application was important to Gebr. Baldauf GmbH & Co. KG. A cost-effective package solution was possible thanks to JUMO Engineering‘s system concept.