Automation makes it possible!
The controlled annealing of plastic parts

Modern plastics are truly high-tech products, replacing traditional materials in more and more areas. They have played a key role in the automobile sector for decades, where they are exposed to particularly extreme loads. Coburg ROS GmbH & Co. KG specializes in the manufacturing of thermoplast and duroplast parts for this industry. 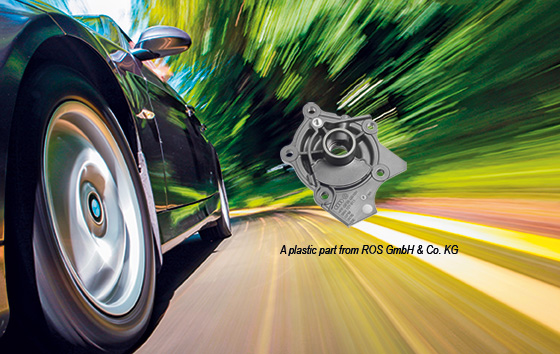 In order to live up to customer demand, uniform quality in the production process must be guaranteed even for large quantities. In a new annealing furnace made by caldatrac® Industrieofenbau GmbH & Co. KG, a JUMO mTRON T automation system helps to ensure constant quality. The challenge for the new plant is to anneal the duroplastics using an even and precise heat treatment. The tolerance limits provided by the customer for these materials are extremely narrow. The raw parts are pushed into the furnace using a tempering trolley. Up to eight different batches on six tempering trolleys can be simultaneously put into the furnace and processed. Due to its construction, an even distribution of heat is achieved inside the furnace to produce a temperature distribution with a maximum deviation of +/– 3 K.
Due to the variety of products, it was particularly important for ROS GmbH & Co. KG to be able to save and edit different annealing programs directly in the system. The caldatrac plant engineering firm chose the JUMO mTRON T automation system as the ideal solution. The advantages are clear: the modular design of the JUMO mTRON T offers maximum flexibility. Different input/ output modules are available, including a multichannel controller module, an analog input module with four or eight channels, a relay module in a 4-channel version, and the freely configurable digital input/output module with 12 channels.

The 4-channel analog input module is the special feature. It is equipped with universal and galvanically isolated analog inputs for thermocouples, RTD temperature probes, and standard signals. Different measurands, such as temperature, pressure, and humidity can therefore be precisely recorded and digitalized using the same hardware.
For individual control applications, the system has a PLC (CODESYS V3), program generator and limit value monitoring functions, as well as math and logic modules. 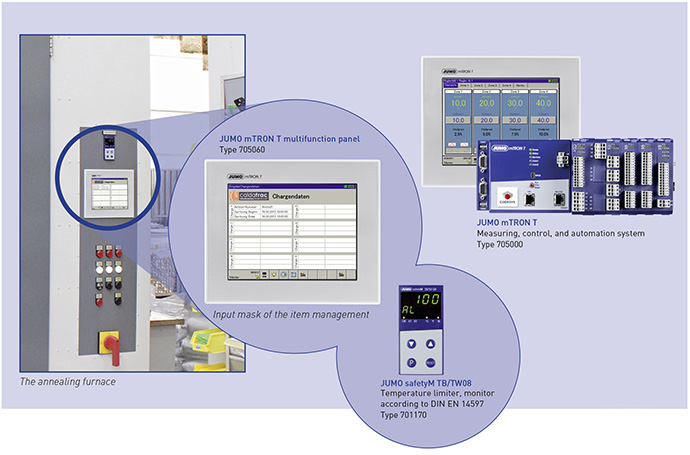 At ROS GmbH & Co. KG, the different programs for the annealing process are conveniently launched by the user via the multifunction panel. The creation of programs, which comprise up to 100 segments, can also be performed directly on the device.
Each annealing process is not only controlled by the JUMO mTRON T system, but is also recorded. The batch reporting of the system enables continuous monitoring and evaluation of the individual furnace components. With a detailed evaluation of the temperatures and programs used, conclusions on quality can be drawn at any time under the influence of different factors.
The appearance of values in curve form is also carried out directly on the display. This recording function is integrated in the JUMO mTRON T and is available to the user for easyto-use data recording.

The graphs plotted here can be evaluated, printed out, and exported using special software. Upon request, an automatic batch report can be made available as a PDF file, which is automatically produced by the system without user action. It also includes a detailed overview of all batches as well as the accurate representation of the recorded values. The particular flexibility of the system also appears in the item management. Each item manufactured in the annealing furnace is created here and assigned to a program. A system plausibility test ensures that only items that were assigned to
the previously chosen program can be annealed. The batch data input is carried out directly on the multifunction panel. In this case, the operation masks were adjusted especially for ROS.